Bolton Wanderers are reportedly considering withdrawing from the FA Cup this season, as Fabrice Muamba continues to fight for his life. 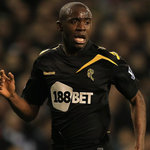 The 23-year-old remains in a critical condition after suffering a cardiac arrest during the cup tie with Tottenham Hotspur on Saturday evening, which was abandoned after 41 minutes following his collapse on the White Hart Lane turf. The rematch is pencilled in to take place next week, but there are now suggestions that the Lancashire club will ask to be withdrawn from a competition they have won on four occasions.

It will be hard enough for Owen Coyle and his players to regroup and continue their campaign as it is, so a return to the same stadium would be a huge mental test for them, particularly so soon after such a distressed event. The Premier League match against Aston Villa on Tuesday evening has already been postponed, whilst they wait on news of Muamba’s condition before making a decision on their match with Blackburn Rovers on Saturday which, whilst key in their bid to avoid relegation, has somewhat suddenly paled into insignificance since events of the weekend.

Muamba is still fighting for his life in the London Chest Hospital, whilst the rest of the footballing world prays for his survival. Fans lay tokens of their hope at their Reebok Stadium home on Sunday, whilst former Bolton midfielder Gary Cahill celebrated scoring for Chelsea by lifting his shirt to reveal a ‘Pray 4 Muamba’ message. Further afield, five Real Madrid stars wore t-shirts with ‘Get Well Soon Muamba’ displayed.

Coyle, meanwhile, delivered the following personal tribute on Sunday: “It is all well and good having a God-given gift and being a great footballer, which Fabrice certainly is, but it is more important to be a good person. Fab is a wonderful lad, with a great sense of humour and a beautiful smile and he is well liked by anyone who has come in contact with him.”