Gary Cahill left Bolton Wanderers in order to display his talents on the biggest of stages, and he didn’t look out of place on Wednesday night. 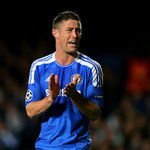 It hasn’t been the easiest of starts for Cahill at Chelsea.

First of all there was the uncertainty over his transfer. Whilst it appeared clear in early January that he would move to Stamford Bridge, it dragged on for a fortnight longer than expected as the two parties struggled to agree personal terms. Worse still, there were suggestions that Andre Villas-Boas was unsure if he wanted the Bolton man after all, despite his contract situation making him a potential bargain signing.

This rumour looked to have substance when Cahill finally clinched his move to the Blues. Although the transfer was completed on 16 January, he had to wait until 5 February to make his debut, and that match will be remembered for Manchester United’s fight-back from 3-0 down to earn a 3-3 draw in the capital. Later that month he was involved in the 3-1 defeat at Napoli, and in early March he was part of the side that lost 1-0 at West Bromwich Albion, a result which cost Villas-Boas his job as he was succeeded, at least for the interim, by Roberto Di Matteo.

And when the Blues recovered from their nightmare in Naples to bounce back in sensational style and progress to the last eight of the UEFA Champions League, Cahill had to watch the drama from the bench. Replacing the injured John Terry after an hour of the quarter-final second leg clash with Benfica was the only other involvement he had in the premier club competition in Europe…until Wednesday night.

Again, the 26-year-old benefited from an injury, this time to David Luiz who suffered a hamstring problem during the 5-1 FA Cup win over Tottenham Hotspur on Sunday. Cahill entered the fray just before the hour mark at Wembley, but with the Brazilian ruled out of the semi-final first leg, it soon became apparent that he would have a bigger role when Barcelona travelled to the English capital.

In truth, it was a nervy opening for the England international, yet this can hardly come as a surprise considering his lack of experience in the competition, the occasion, and the opponents. But he steadily grew into the game, which was evident by a perfectly timed challenged on Alexis Sanchez and, even more impressively, a block on Lionel Messi which denied the Argentine goal number 64 of the season.

His efforts were clearly recognised amongst the home supporters, who have been used to witnessing the solid performances of Ashley Cole and John Terry over the years, but who suddenly realise they may now have a new defensive hero; one who can even stop the World Footballer of the Year in his tracks.

“I could hear [my name] being sung and it was obviously a proud moment for me,” Cahill said in London 24. “You can’t get the ball off him [Messi] can you? Even if you have four or five surrounding him, but I managed to get that tackle in.”

Chelsea, understandably, went to lengths after the game to stress that the tie isn’t over yet. The Blues must travel to Camp Nou next week, and despite their 1-0 advantage, they still have to be considered underdogs against Pep Guardiola’s side who are gunning for a third Champions League honour in just four years, which would also make them the first to retain the crown in its current format. But even if Di Matteo’s team fail in Catalonia, Cahill can at least console himself with the fact that he is likely to experience more of these games in the future.