Martin O’Neill has confirmed Kieran Richardson wants to leave Sunderland and return to London…but which club would be his best fit? 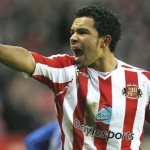 After helping the Black Cats secure an impressive 0-0 draw at Arsenal on the opening day of the season on Saturday, Richardson threw his shirt into the travelling supporters to perhaps indicate his time at the club is nearing an end. And after the match, O’Neill confirmed the 27-year-old is indeed seeking a return south.

“Kieran came to see me a while ago. For family issues and things, he thought there maybe needed a change,” said the Ulsterman. “No-one has come in and made an offer. That, though, does not mean there is nothing happening, I just don’t know. But if he performs like he did against Arsenal, I would like to keep him.”

Richardson has spent the past five years at the Stadium of Light, following a £5.5million move from Manchester United in the summer of 2007. During this time he has racked up 131 Premier League appearances, scoring 14 goals, and he has been used in a variety of positions: although he favours a central midfield role, he has also played out wide and also, including on Saturday, at fullback.

If the England international, who won the last of his eight caps for his country in 2006, is to remain in the top-flight and secure his return to the capital, then his options would probably boil down to three clubs. It is unlikely that the big three of Arsenal, Chelsea and Tottenham Hotspur would look to offer him a dream move, so that would leave Fulham, Queens Park Rangers, and West Ham United.

Due to his versatility he would be an asset to any of this trio, and it wouldn’t be a surprise if there was interest ahead of the 31 August deadline, especially as it is now known that he wants a return to London. Martin Jol, for example, may need more bodies if Clint Dempsey and/or Moussa Dembele follow Danny Murphy through the exit door. QPR, meanwhile, have signed a number of players this summer, but an opening day 5-0 home loss to Swansea City would suggest that Mark Hughes is still in need of some extra quality if he is to ensure a relatively comfortable campaign.

Perhaps the most intriguing option for Richardson would be a move to the Hammers, where he began his career before being plucked for Old Trafford as a 16-year-old back in 2001. Sam Allardyce may have plenty of options for the centre of his midfield, particularly following the arrivals of Mohamed Diame and Alou Diarra, but his summer-long pursuit of Wolverhampton Wanderers winger Matt Jarvis shows he wants more width. And wouldn’t be a better choice at left fullback than George McCartney and Joey O’Brien, who both appeared in the 1-0 win over Aston Villa?

Richardson may not have hit the heights once expected of him when he was part of Sir Alex Ferguson’s plans in Manchester, but he is still only 27 so should now be at the peak of his powers. He also has vast experience of playing in the Premier League, and can provide plenty of positional options. He is in the final 12 months of his contract at Sunderland, and the fact he is keen to return to his London roots would make the Greenwich-born player a chance well worth taking before the window slams shut in 11 days.