Joe Cole is confident Liverpool have made the right appointment in Brendan Rodgers, but insists the new manager should be given time to succeed. 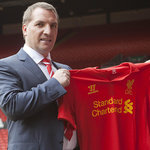 A disappointing eighth-place finish last season couldn’t save even Kenny Dalglish, who was sacked by the Merseyside club at the end of the campaign. A whole host of potential replacements were linked with the subsequent vacancy, and it was something of a surprise when Rodgers was given the nod.

The Northern Irishman, 39, had just ensured Swansea City of a second successive season in the Premier League, having led them there at the first time of asking in the 2010-11 campaign. Previously, he had worked under Jose Mourinho at Chelsea, but his first managerial positions at Watford and Reading proved unspectacular.

At the Liberty Stadium, though, this changed, and he has forged a reputation as one of the brightest young coaches in the game. Progress from the Swans to managing one of the biggest clubs in the country is seen by some doubters as possibly a step too far, but Cole believes the rewards will be evident given time.

The England international, who endured a miserable debut campaign at the club before joining Lille on loan last summer, has been invited back into the fold by Rodgers, who he knows from his days at Stamford Bridge. And the 30-year-old midfielder is convinced that the Reds have appointed the right man, yet must show him the kind of patience which is often little-afforded these days.

“When I heard about Liverpool looking at certain managers, I was praying it was going to be Brendan,” said Cole, who has been included in the squad for the pre-season tour of North America. “I think the owners have made the right choice – it’s been a breath of fresh air.

“Sometimes in English football people automatically think you need to be aggressive. But look at Spain – no-one works harder than them. I firmly believe in that and think it’s now the way forward in football. We’ve seen how successful Spain and Barcelona are.

“The top teams get the ball down and play and move, and that’s what we are going to try and implement here. But it takes time to change things, and great things take time. It’s going to be a building process. As long as we stick together and try to do what the manager wants us to do, this club will move steadily forward again.”