Should Chelsea eliminate reigning holders Barcelona from the UEFA Champions League later this month, they could meet up with an old friend in the Munich final. 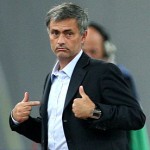 The Blues edged past Benfica at Stamford Bridge on Wednesday night, when they survived a late scare to record a 3-1 aggregate success. Roberto Di Matteo must now prepare his players for a semi-final date with Pep Guardiola’s Barca, which will be concluded at the Camp Nou on 24 April following a first leg six days earlier.

Not many fancy the chances of the Londoners against a club side regarded by some as the finest of all time. And even if they do cause an upset by avenging their 2009 defeat at the same stage, when the home side felt referee Tom Henning Ovrebo served them an injustice, they will face either Bayern Munich in the Bundesliga outfit’s backyard, or Real Madrid, the only team who can reasonably claim to be even better than Barca.

The latter would be an intriguing match-up due, of course, to the Jose Mourinho factor. The self-proclaimed Special One is still treated as a hero by the fans of Chelsea, who have seen a succession of coaches try and ultimately fail to live up to him since his controversial departure in September 2007. During his time in the English capital, the Portuguese delivered two Premier League titles, one FA Cup and two League Cups.

He didn’t, though, manage to repeat the triumph of winning the Champions League, which he did previously at Porto and then repeated in 2010 at Internazionale. Should he now win it with Real, he would step out of the shadows of Ernst Happel and Ottmar Hitzfeld by becoming the first manager to have won the famous trophy with three different clubs. He would also deny Roman Abramovich his first success in the competition.

Since buying Chelsea in June 2003, the Russian oligarch has been desperate to get his hands on the giant pot. Mourinho came close to delivering his dream, but Liverpool denied them at the semi-final stage in both 2005 and again two years later. Avram Grant came even closer: had John Terry converted from twelve yards in 2008, it would have been the Londoners, and not Manchester United, who were celebrating in Moscow. And then, under the leadership of Guus Hiddink, came that controversial clash with Barca, which Frank Lampard openly admits still irritates three years on.

Some have suggested Abramovich is obsessed with the Champions League, although Carlo Ancelotti once insisted the 45-year-old is as equally committed to all trophies. But it can’t be denied that, with the cash he has spent since taking charge of the Stamford Bridge club, the failure to see his side crowned as the best team in Europe must be a source of great frustration. Doubly so if the man he dismissed almost five years ago was to return and deny him the satisfaction of finally achieving his own personal Holy Grail.