A 1-0 win against their neighbours on Monday night means another three points at St James Park on Sunday will likely end Manchester City’s long wait for a third league title. 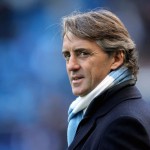 Vincent Kompany’s headed goal late in the first half was enough to secure three points against United, a result which sees the two Manchester clubs tied on 83 points with just two matches remaining. It is the Blues, though, who have the clear advantage, as they travel to Newcastle United this weekend knowing they have an eight-goal swing over the champions when it comes to totting up the goal difference.

That clash on Tyneside is the hardest of City’s remaining two matches, with Queens Park Rangers, despite their desperate need for points as they look to avoid relegation, not expected to spring a surprise when they visit the Etihad Stadium on the final day of the campaign. David Silva, the Spanish playmaker, is certainly viewing it this way too, as he describes the trip to Newcastle as a final for the Blues.

“The Newcastle game on Sunday is like a final for us now,” the former Valencia star is quoted in The Mirror. “We have to win it. We are ready to win the title. Last year, we won the FA Cup and qualified for the Champions League. This year we’re challenging for the title. Then next season we can challenge for the (UEFA) Champions League.”

Since hitting a three-game winless run from 24 March to 8 April, during which time they drew twice and lost at Arsenal, City have won their four other fixtures whilst adding a plus 12 figure to that all-important goal difference. In the four matches in the same period, United have drawn once and lost twice, with a 4-0 thumping of Aston Villa the only victory to look back upon. It has been an alarming slump for Sir Alex Ferguson’s men, who have become so accustomed to being in this position over the years.

City know Newcastle will be no pushovers, especially as Alan Pardew’s side look to clinch a top-four finish in what has been a surprisingly impressive season for the Magpies. But if Roberto Mancini’s men take another giant step to the title by leaving Tyneside with another three points in the bag, few would deny they deserve a first championship since 1968.