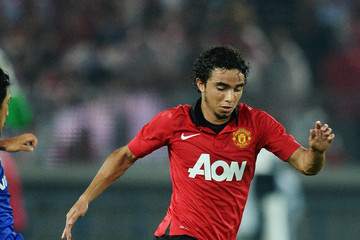 Fabio da Silva admits he may have to look elsewhere for first team football, as he struggled to nail down a regular place at Manchester United.

Along with his twin brother, the 23-year-old moved to England in 2008 when Sir Alex Ferguson brought them both to Old Trafford from Fluminense. But whereas Rafael has established himself as a key member of the Reds plans, Fabio has made just 22 Premier League outings and spent last season on loan at Queens Park Rangers.

This term, under new manager David Moyes, he has started just once, and appears to be behind Alexander Buttner as well as first choice pick Patrice Evra in the left back pecking order. And the defender has now conceded that he may have to quit Manchester, either in January or next summer, if he is to further progress his career.

“I don’t know [about my future]. I think the time has come and maybe in the next window or even next season, I think I might leave,” he is quoted by ESPN Brasil. “There are good possibilities. I’m looking for other clubs. There’s nothing certain, we’ll leave it for later. I want to be happy. I want to play, I want to be with my family. I can return to Brazil, or maybe not, I’m checking with my agent to see what is the best for me.”

It has been suggested that a return to Fluminense, for whom he spent three years in the youth setup, could be an option. And Fabio admits this is could be a satisfactory solution: “I have a very big affection for Fluminense. Certainly if I have to go back to Fluminense I would go with great pride, because I have a special affection for them.”