Junior Hoilett completed his transfer to Queens Park Rangers on Friday afternoon, and revealed the chance to link up with Mark Hughes was a big factor in his decision. 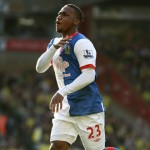 The Canadian-born forward’s contract at Blackburn Rovers expired at the end of last season, and following their relegation from the Premier League, it was always likely he would be heading through the Ewood Park exit door. A number of clubs, including Arsenal and Tottenham Hotspur, had been linked with the 22-year-old, and whilst he has pitched up in London, it is at Loftus Road where he will be plying his trade next season.

Hoilett has agreed a four-year deal with the Hoops, who will hope to avoid a tribunal by agreeing a compensation fee with the Lancashire side for his signature.  In the meantime, the youngster has revealed the chance to link up with Hughes was a big factor in his decision, having worked with the Welshman during their time together at Rovers.

“The manager obviously played a big part in my decision to come here,” Hoilett, who actually made his debut for Blackburn under Sam Allardyce after Hughes had left for Manchester City, told the club’s official website. “He’s someone I know well here having worked with him and his backroom team at Blackburn. The ambition to take this club to the next level was something I really wanted to be part of. This is the perfect place for me to further my career.”

Hoilett is the latest addition to a squad which narrowly avoided relegation on the final day of last season. Rob Green, Ryan Nelsen and Andy Johnson all arrived earlier this summer on free transfers, whilst Samba Diakite joined on a permanent basis having impressed whilst on loan from Nancy last term. Park Ji-Sung arrives from Manchester United for a fee which could reach £5million, and his Old Trafford team-mate, Fabio da Silva, will spend the coming campaign on loan at Loftus Road.