He may still be relatively inexperienced when it comes to life in the Premier League, but Tom Cleverley’s return to Manchester United can’t come quickly enough for Sir Alex Ferguson. 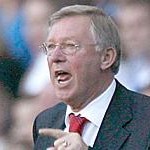 First of all, there can be no suggestion that had the 22-year-old been wearing a red shirt at Old Trafford on Sunday, Manchester City would not have left the home of their rivals with maximum points. There were too many factors in the Blues deserved and spectacular win, and the absence of a player who would have been making a first appearance in almost six weeks was not one.

However, there is little doubt that in recent games, United have missed the creativity of the youngster. Cleverley started the first four games of the season for Sir Alex Ferguson’s side, having returned to the club in the summer following a campaign on loan at Wigan Athletic. And, as he and Anderson complemented each other in the heart of the midfield, there were clear signs that he would be difficult to shift from the first team.

But an ankle injury in the opening stages at Bolton Wanderers on 10 September curtailed the progress of the midfielder, who had impressed to such an extent he has been tipped as a potential member of Fabio Capello’s England squad for 2012. Prior to that 5-0 win at the Reebok Stadium, he had started in the previous three league which returned three victories and a total of thirteen goals chalked up and three conceded.

In the five matches the Basingstoke-born player has missed, United have seen off the challenge of Chelsea, laboured to victory over Norwich City, shared the spoils at both Stoke City and Liverpool, as well as the 6-1 humiliation at the hands of City. His presence may not have made any difference against the teams in blue, but he could have made life more comfortable against the Canaries and was sorely missed at the Britannia Stadium and Anfield.

So, just how important is Cleverley to Ferguson’s plans? Long-term, the fact he has recently been handed a new contract, which is designed to run until 2015, answers that question. But in the short-term, it also appears as though the playmaker will have a bigger role than many expected him to have.  Without him United’s midfield has often looked too predictable and lacking in imagination; with him, there is more creativity, play is faster and has more purpose.

The more cautious amongst us could argue that there is a danger that placing such responsibility on the shoulders of one so young could backfire. And, of course, if he does get a run of games in the first team it is perhaps unreasonable to expect him to produce show-stealing performances each and every week. But at a time when much is expected of costly – and younger – players such as David De Gea, Phil Jones and Chris Smalling, Cleverley deserves the chance to continue where he left off when he returns from his enforced absence.