Sandro Mazzola believes Internazionale should show Diego Forlan the door, after the forward refused to comply with Claudio Ranieri’s instructions on Sunday. 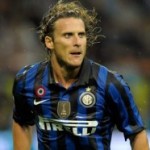 As the Nerazzurri once more failed to impress during the goalless draw with Atalanta, coach Ranieri wanted to introduce Forlan on 77 minutes, in an unnatural position on the left hand side. The former Manchester United man was reluctant to agree to such a role, so he remained on the substitute bench whilst Luc Castaignos instead replaced Joel Obi.

Comparisons can be made with the Carlos Tevez situation of earlier this season, when the Argentine refused to warm up for Manchester City in their UEFA Champions League clash at Bayern Munich. But whilst the 28-year-old has now been welcomed back to the Blues squad, albeit after a lengthy standoff, Inter legend Mazzola, a winner of four Serie A titles and two European Cups, has called for club owner Massimo Moratti to send Forlan packing.

“It cannot be explained, send him home,” the 69-year-old, who spent his entire career at the club, told tuttomercatoweb. “In difficult times, we need certain types of players. Players should go out there and give everything for the shirt, not argue with the coach. If he had wanted to, he could have come on and honoured the shirt, not necessarily follow the coach’s instruction, but play with his head and in the end only fight with the coach.”

Ranieri, meanwhile, has played down the supposed bust-up. The former Chelsea boss claims Forlan didn’t refuse to play, but when asked to perform on the left hand side, replied with honesty that such a role is not suited to his game. The 32-year-old has yet to publicly comment on the matter, although it has been suggested that he has told journalists off the record that he is backing up this side of the story. Even so, some would understandably argue that even this equates to a refusal to meet the demands asked by the coach.

One thing that can’t be denied is that Inter’s failure to beat the 12th placed Atalanta is yet another disappointment in an increasingly frustrating campaign. Ranieri’s side, who missed a first half penalty through Diego Milito, have now won just two of their last 12 matches in all competitions, and have only collected three points in Serie A once in their previous nine attempts. They have now fallen seven points off the final Champions League qualification berth, and an embarrassing 19 behind leaders Milan.