Having committed himself to Manchester City for the next six years, Vincent Kompany hopes the club continue to share his obsession with glory. 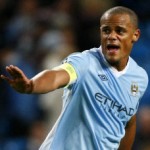 Of all the signings which have arrived at the Etihad Stadium in recent years, it is fair to suggest the Belgian international represents their best piece of business. The 26-year-old played a key role in their FA Cup success of 2011, and last season captained them to their first league title since 1968, with his headed winner against Manchester United in April setting them up to pip their rivals on the home straight.

Kompany cost what now seems a ridiculously low fee of just £6million when Mark Hughes plucked him from Hamburg in 2008, and he has firmly established himself as not just one of the best defenders in the Premier League, but also one of its most commanding leaders. When Carlos Tevez was stripped of the captaincy last year, Roberto Mancini turned to his number four, and whilst this may have been the obvious choice, it became clear last term that it was a shrewd move from the Italian coach.

Because it is not just on the pitch where Kompany impresses, the way he conducts himself in the public eye can only be admired, and this is something of increasing importance in this era of Premier League clubs striving for a global presence. He is the perfect role model to portray the ‘new’ Manchester City, and even at this stage, you could well imagine him becoming an ambassador for the club in years to come. For the time being, though, his only thought is to add to the honours he has helped the Blues to over the past couple of years.

Last week Kompany penned a deal which will keep him in the blue half of Manchester until the end of the 2017/18 campaign. And he has wasted no time in offering his opinion that whilst unlikely, there is no reason why he shouldn’t add a further six league titles to his haul during this time. A key ingredient to City’s success, claims the defender, is the obsession he and his team-mates have in achieving victory.

“I’ve signed a six-year deal, so there are six possible titles within those years,” he said “So you know what? I want to get them all. It probably won’t happen, but we’ll see in six years time. I think the six-year deal is a statement of my ambitions at the club.

“Before I won the league, I didn’t think I could win it so I prepared twice as much as others and did everything to win it. It was an obsession for us and myself, so I just hope we keep that obsession. Every day of my life I’m still obsessed by this moment, by the victory at the end of the season. It’s what I want to have again.”