Demba Ba was back on the scoresheet on Sunday afternoon, and then revealed he was never going to leave Newcastle United during the summer window. 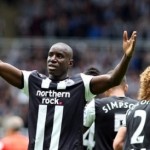 The Senegal international enjoyed a fine debut season for the Magpies last term, hitting 16 goals in 34 matches to help Alan Pardew’s side to a fifth place finish in the Premier League. However, the last of these strikes came in a 2-1 win over Aston Villa in early February, as he was forced to adapt his game following the arrival of compatriot Papiss Cisse.

This didn’t affect his importance to the first team though, so the £8million release clause in his contract was cause for concern at St James Park. The likes of Liverpool and Tottenham Hotspur had been linked with the 27-year-old, but neither club took advantage of the release fee which expired at the end of July.

Ba was back on the scoresheet on the opening day of the season on Saturday, with his sublime effort setting United on their way to a 2-1 win over Spurs. And after the match, he revealed that even there had been an approach for his signature he would likely have refused a move, such is his contentment on Tyneside.

Ba accepts his form dipped during the second half of last season, as he was asked to play out wide or in a deeper position to that of which he started the campaign. And whilst he was happy to do so, he knew he had to work on certain aspects of his game during the summer. And he hopes his goal against Tottenham will be the first of many as his performances reflect the extra work he has put in during recent months.

“I spent a lot of time after games, watching them again the next day on my own and analysing them,” he added. “That’s why I’m back on the score sheet. A lot of things were going on last season, I was playing on the side and out wide. I wasn’t getting enough of the ball. I was coming too deep and they were putting the ball behind defences and I wasn’t there, so I worked on that.”

Newcastle’s win over Andre Villas-Boas’ side has ignited hope that last season will prove no flash in the pan, as they look to go one step further and qualify for the UEFA Champions League. They face another of their top-four rivals next weekend, when they travel to Stamford Bridge to face Chelsea.