John W Henry believes it was obvious to every Liverpool fan that a change of management was needed at the club following a disappointing 2011-12 season. 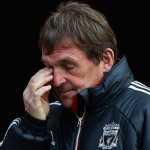 As one of the most celebrated players in the club’s illustrious history, and indeed the last manager to guide them to a league title some 22 years ago, the decision to reinstall Kenny Dalglish in place of the sacked Roy Hodgson was met with unanimous joy in the red half of Merseyside in January 2011. The early signs offered much encouragement, with even the loss of star striker Fernando Torres to Chelsea for a British record £50million failing to dampen spirits.

Dalglish, who added Luis Suarez and club record signing Andy Carroll to his squad to make up for the departure of the Spaniard, was given a new three-year contract towards the end of the season, and he set about further rebuilding his side during the summer. But expensive recruits Stewart Downing, at £20million, and £16million youngster Jordan Henderson failed to deliver, not to mention the continuing struggles of the £35million former Newcastle United striker.

Although the Reds ended a six-year trophy drought by defeating Championship side Cardiff City in a League Cup final penalty shootout win in February, their eighth-place finish in the Premier League was their worst since 1994, with the much-coveted top-four finish never looking remotely within reach. And despite also reaching another final in May, Henry has revealed the club would have sacked the Kop legend even had they overcome Chelsea in that FA Cup showdown at Wembley.

“The FA Cup would not have made any difference had he won it, no, no,” said Henry, who is the frontman of the club’s Fenway Sports Group owners. “For us we were 17th over the second half of the season and Liverpool should not be in that position. I don’t place the blame on Kenny Dalglish and assistant Steve Clarke, but I think it was obvious to every fan that something was wrong and something needed to be done.”

Dalglish was sacked three days after the final game of the season, and a little over two weeks later they appointed Brendan Rodgers, who had led Swansea City to within five points of the Anfield club upon the Welsh side’s long-overdue return to the top-flight. The affable Northern Irishman has already been assured he will be given time to restore the club to its former glories, with Henry insisting that whilst a top-four finish is always the goal, it is not essential next term.

“We don’t want to put any pressure on Brendan by saying you have got to make the Champions League this year,” the American said last week. “Of course he wants to make the Champions League, we all do and so does every team in the Premier League. I thought it was realistic last season but we were so far off that pace. At this point we’re just trying to get things stabilised – that should be one of our goals.”