If Newcastle United are determined to keep Cheick Tiote beyond the current season, Derek Llambias’ comments are unlikely to help their cause. 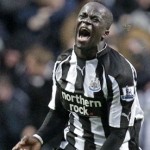 This season has gone far better than even the most optimistic of Newcastle fans may have dared to anticipate when the first ball was kicked back in August. With 11 games remaining in the Premier League, the Magpies currently stand just five points behind Arsenal in the final UEFA Champions League qualifying position, a margin which will be cut to two if they can win at the Emirates Stadium on Monday evening.

St James Park has also unearthed new heroes in recent months, most notably Yohan Cabaye, the brilliant French midfielder signed from Ligue 1 champions Lille in the summer, and Demba Ba, who arrived from West Ham United on a free transfer and has scored 16 times since. And then there is the expensive addition of a second Senegalese international striker in Papiss Demba Cisse, who made no qualms of taking the famous number nine shirt and has already shown great promise.

And don’t forget the players who have already earned a place in the supporters hearts: captain and defensive rock Fabricio Coloccini and Tim Krul, one of the best young goalkeepers in Europe, both signed new contracts last week, whilst unsung hero Ryan Taylor, who won’t ever have to buy a beer on Tyneside again after his winner against Sunderland at the Stadium of Light in August, has also agreed fresh terms.

When these new deals were released into the public arena, Alan Pardew stressed that keeping his squad together was every bit as important as adding to it. Yet the reality is, to build on the progress made this season, the manager will have to delve into the transfer window when it swings open in the summer. How much money he will have available remains to be seen, and it is likely he will have to boost whatever funds he is given by raising more cash from selling either a handful the fringe players amongst his existing pool, or fear a fans backlash by offloading one of their new idols.

One such player who falls into the latter category is Tiote. Signed from FC Twente as former boss Chris Hughton prepared for the Premier League return in the summer of 2010, the 25-year-old has been a huge success in England. He enjoyed such an impressive debut campaign he was handed a new contract before it finished, meaning he is now tied to the club until 2017. However, with Chelsea and Manchester United said to be circling ahead of the summer, managing director Llambias admits it may be difficult to retain the services of the Ivory Coast international.

“We’ll be losing one or two names this summer, but that’ll be regenerated back into the squad,” he said. “For instance, Tiote has been with us a year and a half. He is out there. People know he’s a good player. He’s proven in the Premier League. How are we going to stop a big club from coming in for him? It’ll be very hard. If someone knocks on the door, the reality may be that we have to trade.”

If Sir Alex Ferguson and Roman Abramovich had wondered as to the availability of Tiote during the summer weeks, these comments are likely to have added to the belief he is very much attainable. But of all the players Pardew may be willing to lose, surely his key midfielder is the last? It is no coincidence that of the seven matches Newcastle have lost this season, he has been absent in five.

Pardew has lost Andy Carroll, Kevin Nolan, Jose Enrique and Joey Barton and still been able to prosper, but to find a replacement for Tiote would provide him with perhaps his biggest challenge, and one which may become a reality now that Llambias has all but invited interest in the player.