Mike Phelan admits he still analyses Manchester United’s collapse of last season, when they were pipped to the title on goal difference by neighbours City. 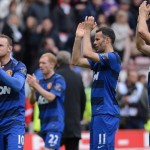 It appeared as though United had bounced back from their nightmare 6-1 derby loss at Old Trafford when they moved into the home straight, having opening up a handsome eight-point lead over the Blues. However, Sir Alex Ferguson’s side suffered an uncharacteristic slump at the business end of the season, allowing City to take the title on the final day of the season with a dramatic 3-2 win over Queens Park Rangers.

Although the new campaign is now less than a month away, assistant manager Phelan admits he still thinks about last term, and just how the Reds let their crown slip away. Unsurprisingly, it is the 4-4 home draw with Everton – in which United led 4-2 with seven minutes left – the defeat at Wigan Athletic and also the loss at the Etihad Stadium, which gave City the initiative, that occupies much of his analysis.

“You have moments when you reflect,” said the former United midfield player. “In some ways, when you do look into it and start to think, you wonder whether the eight-point lead came at the right time. Did it settle us down too much? Obviously there were games we should have won, that we were in control of, that we let slip.

“It was through lack of concentration in certain games, especially Everton, when we were at home and 4-2 up. It was there for a Manchester United win and it didn’t happen. But you could also pinpoint other games; Wigan, losing a goal right on half-time against Manchester United which changed the second half. The whole season just finished disappointingly flat.”

Ferguson has made it clear that his priority for the coming season is to wrestle the title back from Roberto Mancini. The Scot has already added to his midfield with the signings of Nick Powell and, more significantly in regards to the immediate future, Shinji Kagawa, the Japanese international. It has also emerged that a £15million bid for City target Robin van Persie, meanwhile, has been rejected by Arsenal during the past 24 hours.