Jason Roberts hopes to forge a successful partnership with Pavel Pogrebnyak this season, as Reading return to the Premier League after an absence of four years. 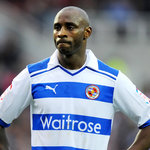 Brian McDermott led his side to the Championship title last term, and has been busy adding to his squad during the summer window. A combined £5million has been spent on defenders Chris Gunter and Adrian Mariappa, who have been signed from Nottingham Forest and Watford respectively, and the rest of the new arrivals have been free transfers.

Left fullback Nicky Shorey, who played for the Royals in their two previous seasons in the top-flight before leaving in 2008 for a disappointing spell at Aston Villa, has rejoined from West Bromwich Albion, midfielder Danny Guthrie has been snapped up from Newcastle United, and there is excitement over winger Garath McCleary, 24, who impressed at Forest last season.

But the signing which has made the most headlines at the Madejski Stadium is that of Pogrebnyak, the Russian international. The 28-year-old spent the second half of last season in the Premier League with Fulham, and after scoring six goals in 12 appearances, he was widely expected to join the Craven Cottage side permanently in the summer.

However, Martin Jol’s club were unable to agree personal terms with the striker, who became a free agent when his contract at German side Stuttgart expired. This allowed McDermott to step in and take him on a three-year contract, and now veteran striker Roberts is hoping to forge a fruitful partnership with the new Reading number seven.

“We played two up front last year and hopefully we will continue to do that,” the 34-year-old, who scored six goals following his arrival from Blackburn Rovers in January, told Sky Sports. “He (Pogrebnyak) is a big name player who has come in and I would like to see myself up front with him. But there are other players here like Noel Hunt, Adam Le Fondre and Simon Church and other players. They will want to take their chances, as will I.”

The Royals mark their return to the top-flight with an opening day home clash against Stoke City, before travelling to Chelsea for the only fixture in the midweek calendar four days later. One player no longer in McDermott’s plans is Michail Antonio, who on Monday completed a permanent switch to Championship side Sheffield Wednesday after impressing on loan last term.