AC Milan are in no hurry to offer Zlatan Ibrahimovic a new contract, despite the excellent form of the Sweden international this season. 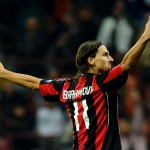 The 30-year-old has scored 15 goals in 19 Serie A appearances for the Rossoneri this season, as they look to fend off competition from Juventus to retain the title. A further five goals in as many UEFA Champions League matches underlines his impressive campaign, which is set to resume this weekend.

Ibrahimovic remains under contract at the San Siro until the summer of 2014, but there have been suggestions that Milan may look to extend this deal to secure his services for the remainder of his playing career. These reports have grown since his agent paid the club a visit earlier this week, but vice-president Adriano Galliani is refusing to offer the striker a renewed deal, at least not yet.

“There will be no renewal for Ibrahimovic, absolutely not,” he told Sky Sport Italia. “We are only at the start of 2012 and he still has two years to run on his present deal. It’s a long deal and agent Mino Raiola was here yesterday to talk about some youngsters.”

Meanwhile, Ibrahimovic will return to the fold when Massimiliano Allegri takes his side to Palermo on Saturday evening, following the completion of his three-match suspension. The Rosanero have the worst away record in Serie A, but they are a different proposition at the Stade Renzo Barbera, where they have won their last four fixtures. It has been a little over six years since Milan last triumphed there, when goals from Filipo Inzaghi and Andrei Shevchenko secured a 2-0 win.

Ibrahimovic has enjoyed success on this ground in the past whilst wearing the colours of Internazionale. In November 2006 he scored within ten minutes to send Roberto Mancini’s men on the way to a 2-1 success, and two years later he grabbed a brace in a 2-0 win. If he can add to his tally this weekend, it may play a significant part in him recording his ninth successive championship win.