Earlier this summer the atmosphere around Aston Villa was one of disillusionment, but James Morris feels there is much cause for optimism ahead of the new season. 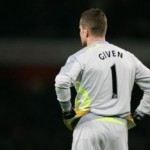 Two and a half years ago, on 28 December 2008, Liverpool travelled to St James’ Park and towered above a hopeless Newcastle United side, beating them 5-1.

In such circumstances, a goalkeeper who has conceded five goals would usually be criticised, or at least held partly to blame. But not this time, as the goalkeeper was Shay Given.

Despite seeing the ball fly past him on five different occasions, the Magpies number one gave an overall performance so brilliant that the Daily Mail’s Colin Young gave him nine out of ten in his match report the next day.

Where Manchester United got the bargain of last season for £7million Javier Hernandez, Aston Villa have probably already won this abstract accolade by signing Given from Manchester City for £3.5million. Great business considering Given would be worthy of the number one jersey in United, Arsenal and Tottenham’s current squads.

But it is not just the goalkeeping position where Villa’s prospects are bright. After a poor 2010/11 season where they were very lucky to finish ninth, Alex McLeish’s side are well placed to surprise the Premier League this coming season.

Villa will not concede many if Richard Dunne and James Collins show the same commanding consistency as they did in 2009/10. Stephen Warnock, England’s second best left back that season, should also be rejuvenated after the exit of his nemesis Gerard Houllier.

In midfield, Villa remain strong on the wings despite Ashley Young and Stewart Downing leaving, with Marc Albrighton and the incoming Charles N’Zogbia providing pace, superb crossing into the box and goals. Their supply could equate to at least thirty goals for the strike partnership of Darren Bent and Gabby Agbonlahor.

Captain Stiliyan Petrov is a calming presence in front of the back four, whilst an injury free Fabian Delph can show why he was the most highly rated young midfielder in the country when he signed from Leeds United two years ago. And perhaps McLeish may coax some impressive performances out of Stephen Ireland. But that is a big perhaps.

So, provided McLeish (who, granted, is a very good appointment) doesn’t hold his team back with cautious tactics that blighted Birmingham City last season, and that his squad doesn’t accumulate too many injuries, don’t be surprised if Villa are back in the top six come May 2012. You heard it here first.