Cementing his place as Stoke City’s regular number one is now the only concern of Thomas Sorensen, who announced his international retirement on Tuesday. 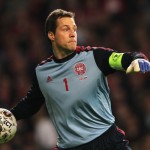 The 36-year-old was tasked with the job of replacing the great Peter Schmeichel as Denmark goalkeeper when the Manchester United ace stepped aside in 2001, and he relished the challenge to quickly establish himself as an able successor. Sorensen featured in the World Cups of 2002 and 2010, as well as helping the Danes reach the last eight of Euro 2004.

In total, he has made 101 appearances for his country since debuting in 1999, but he missed out on Euro 2012 this summer due to a back injury sustained in a friendly defeat against Brazil in preparation for the tournament. Having admitted to being ‘devastated’ by this blow in late May, he also gave an indication that he would be prepared to fight for his place when international action resumed in the new season.

However, Sorensen has had time to consider his options in the subsequent weeks, and has clearly had a change of heart after posting the following message on his Twitter account on Tuesday afternoon: “I have today made the announcement that I am finishing my international career. So proud to have represented Denmark 101 times. Time of my life.”

The former Sunderland and Aston Villa man will now focus all his attention of becoming the regular number one pick for Stoke. Tony Pulis has alternated the Dane with Asmir Begovic, the Bosnian international who is 11 years the junior of his rival, in various competitions over the past two years. But in the Premier League, the younger man has been much preferred by the Potters, making 51 appearances compared to Sorensen’s 26.