To put it bluntly, on display at The Britannia Stadium in Wednesday’s Carling Cup tie between Stoke City and Liverpool were 21 professional footballers and one world class superstar. Or to put it even more bluntly, Stoke City 1-2 Luis Suarez. James Morris writes. 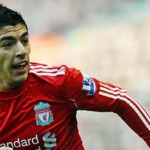 Liverpool, so often scorned in the past for their reliance on Steven Gerrard and Fernando Torres, are beginning to depend on Suarez in the same way. If the impish striker was not a Liverpool player right now, it is very difficult to imagine the optimism currently pervading the club under Kenny Dalglish.

Suarez, for all his unattractive traits, sits with David Silva, Sergio Aguero, Wayne Rooney and Robin van Persie as one of the top five players in the current Premier League season. There are not many others who could have even contemplated his nutmeg through Ryan Shotton’s legs and brilliant curling shot from the edge of the Stoke penalty area – let alone pull it off.

As a striker, Suarez is typical of the latest fashion that has recently been infused into the game’s forward play – that of movement. Danny Welbeck’s place in Manchester United’s first team is also based on the same trait, having made the measured Dimitar Berbatov almost redundant in United’s league games.

Predictably, this brings us to Andy Carroll. How long can Dalglish persist with a lumbering target man when his smooth passing side can benefit from the better movement and touch of Craig Bellamy and Dirk Kuyt? Even with eight changes made for the Stoke match, Liverpool retained passing fluency in the face of Stoke’s constant pressing – until the ball reached Carroll, that is. With Carroll looking so uneasy right now, he has the appearance of a player who could do with a morale boosting loan spell. But of course, it is difficult to loan out the equal 13th most expensive player of all time.

Fortunately for Liverpool, however, they have Suarez and a returning Gerrard to get their team out of further problematic situations in the future. Reds fans should be warned, though. Following his headed winner in the 85th moment against Stoke, Suarez kissed the club badge. For a player of his ability, this is never a good sign.