Having been named Player of the Year by Aston Villa fans, Stephen Ireland appears to have finally rediscovered the form which made him one of the best young talents in the country. 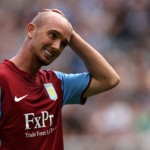 After narrowly missing out on the PFA Young Player of the Year award, there was consolation for Ireland when the supporters who watch him week in and week out named him as their star performer of the season. In return, the midfielder penned a new five-year contract, and he vowed to stay even longer as he set his sights on silverware.

“These are exciting times,” he said. “I was going to be here, and hopefully for the remainder of my career. I don’t see why not. I really want to become a hero here, to hopefully achieve things. I’m settled here – I love the club, I love the fans, and I don’t see what’s going to make me leave this club. Hopefully we can compete for the title and get back into Europe.”

Twelve months later, though, Ireland was on his way out of Manchester City with his reputation in tatters. He had failed to find anything like his best form under new coach Roberto Mancini, who was already cracking on with the plans the Irishman had longed to be involved in. Included in these plans was the acquisition of James Milner, and in order to recruit the England player from Aston Villa, Ireland was offloaded in part of the deal.

Far from the praise he had littered on the Etihad Stadium club less than a year earlier, this time he launched a scathing attack on his former employers, insisting he was glad to be getting away from the Blues despite the exciting times that loomed around the corner. In fact, of the transaction, he insisted that it was he and Villa who had the better end of the transfer.

“I think Aston Villa got a really good deal,” said the then 23-year-old. “I guess James Milner must think the grass is greener on the other side. He’s going to get a shock soon because it’s definitely not that way. I’ve really landed on my feet here. I think it’s a family club and one that will get the best out of me. I am actually shocked at how good it is.”

At the end of that season, Milner was celebrating ending City’s 35-year wait for a trophy when they defeated Stoke City at the FA Cup final at Wembley, whilst also ensuring his passport was valid following their qualification to the UEFA Champions League. Ireland, on the other hand, had made just ten Premier League appearances for Villa and was shipped off on loan in January to Newcastle United, for whom he made just a further two outings.

It was another dark period for a player who, before the billions came rolling in at City, was dubbed one of the best talents in the country. Unlike now, the Blues were not in a position where they could reject sizeable bids from rival clubs for their star players, and there was talk that Ireland could be lured from the likes of Arsenal or even Manchester United. He’d had his problems off the pitch, which were well documented, but this time his troubles were on the field, as his future looked uncertain in the Midlands.

However, the much-criticised Alex McLeish was installed as Gerard Houllier’s successor at Villa, and whilst the Scot has done little to win over the supporters, he immediately had Ireland onside as the former Cobh Ramblers youngster realised this was perhaps his last chance to salvage his reputation. And following Ashley Young’s departure to Old Trafford, McLeish instilled some confidence in the midfielder by handing him the number seven shirt.

It wasn’t all plane-sailing – posing with a shisha pipe on Twitter is never a good idea – but eventually Ireland began to find his feet and on New Years Eve he scored his first ever goal for Villa in the 3-1 win at Chelsea. A fortnight later he had already matched his tally of ten appearances for last season, and he has since gone on to make a total of 22 in the Premier League, 17 of which have been starts, and scored five goals.

Ireland’s return was confirmed this week when he was named as Villa’s Player of the Year by the supporters, and McLeish believes the reasons for his upturn in fortune is an improved attitude and greater work-rate. Maybe that win at Stamford Bridge was the turning point, and he may even look back at the game in years to come as the one that changed this career.

“He was tremendous and he has really looked a different player,” McLeish, speaking to the official club website, said of that Chelsea win – three points that could yet ensure their top-flight status. “But I think what for me has improved Stevie’s overall game is his harrying and chasing of opponents and closing people down which you really need all your midfield players to do. It shows you what can happen when a player has that confidence.”

Confidence is something Villa have little of at the moment. With two matches remaining, they are just three points above the relegation zone and entertain a resurgent Tottenham Hotspur on Sunday afternoon before ending the season at Norwich City next week. If Ireland was to inspire the team in order to secure the points needed to clinch survival, then he could even be forgiven for revealing those famous Superman briefs again.