Should they get past Benfica on Wednesday, Branislav Ivanovic feels Chelsea’s tag as outsiders for the UEFA Champions League could work in their favour. 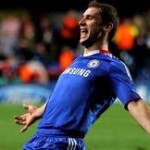 A Salmon Kalou goal in Lisbon last week means the Blues are defending a 1-0 lead at Stamford Bridge on Wednesday, making them favourites for a sixth appearances in the semi-finals in nine years, yet their first since 2009. Only once have they progressed further, when they got the better of Liverpool in 2008 before losing the final in that heartbreaking penalty-shoot out to Manchester United in Moscow.

Four years on, not many are expecting a second final this year. If they manage to hold out against Benfica, Chelsea will be paired with either AC Milan or reigning champions Barcelona in the last four. It would take a memorable performance to get past either, particularly the latter, and even if they do, they would face Jose Mourinho’s Real Madrid or hosts Bayern Munich at the Allianz Arena on 19 May.

Of the two Spanish competitors, one is considered to be the best team in the world whilst the other have scored 100 goals as they look certain to win their domestic title, and are gunning to be crowned European champions for a tenth time. Milan, meanwhile, are in front in Italy as they seek to retain the championship, whilst Bayern are chasing a second Bundesliga title in three years and boast the likes of Arjen Robben, Mario Gomez, Bastian Schweinsteiger and Franck Ribery.

By comparison, whilst it would be foolish to write Chelsea off completely, their season has been their most troublesome for years: although they have an FA Cup semi-final to look forward to, they face a fight to finish in the top four of the Premier League, whilst they don’t even have a permanent manager having sacked Andre Villas-Boas and replaced him with Roberto Di Matteo on a caretaker basis. But as the Champions League odds stack up against them, you won’t find Ivanovic complaining.

“If people think like that it can be good for us because we will feel less pressure, which can be very important,” the Serbian international is quoted on skysports.com. “But we have to go game by game and prepare everything. We will see how we go. We have to be careful and ready for what we need to do.”

Chelsea warmed up for their clash with Benfica with a 4-2 win at Aston Villa, a match which saw Fernando Torres end his six-month wait for a league goal when he struck the fourth to seal the three points. The Spaniard also provided two assists for Ivanovic, and after his double against Leicester City in the FA Cup, he has now has a return of three goals in his last five appearances. The Portuguese side, meanwhile, continued to keep pace with Porto at the top of the Primeira Liga with a narrow 2-1 home win against Sporting Braga, courtesy of a last minute Bruno Cesar goal.

Chelsea have never been crowned European champions in their history, and although they have often threatened in the Roman Abramovich era, the closest they have come was in 2008 when they lost to Manchester United on penalties in the final.