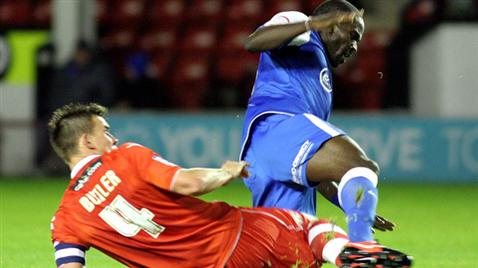 Walsall are hopeful they can persuade Andy Butler to stay at the club.

The 29-year-old has been at the Banks’s Stadium since November 2010, when he joined from Huddersfield Town on a contract until the end of the season. After impressing during the remainder of the campaign, even winning the club’s Player of the Season and the Players’ Player of the Season, he was rewarded with a fresh two-year deal.

Butler, who is now the captain of the League One club, has gone on to make over 100 league appearances for the Saddlers, including 37 this term as they look to secure promotion to the Championship. But with his contract set to expire at the end of the campaign, Sky Sports claim a number of clubs are keeping tabs on his situation.

Walsall, though, remain eager to reach an agreement with the defender, who has also played for Scunthorpe United and has had loan spells at both Grimsby Town and Blackpool. And his centre-half partner Paul Downing is certainly hopeful that a deal can be wrapped up shortly.

“He’s a massive part of the team and it’ll be a really big coup if we could get him to sign,” he said in the Express and Star earlier this week. “I know he’s really happy here but there’s been interest in him all season. There have been clubs after him because he’s that type of fully committed centre-half that all managers want in their team.  It doesn’t surprise me.

“I’ve been giving him a bit of stick trying to get him to sign. He’s been a massive help to my game and I enjoy playing alongside him. He’s got a lot of experience at the back. I’m always learning from him and communication is vital. The strikers get the glory but it’s equally important you have a solid base and he’s a massive part of that.”