Dave Whelan has indicated that Wigan Athletic could yet cash in on Victor Moses, despite rejecting a third offer from Chelsea for his signature. 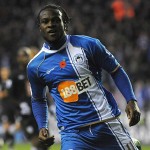 The 21-year-old forward has established himself as a key member of Roberto Martinez’s first team, following a £2.5million move from Crystal Palace in the winter of 2010. Moses has since gone on to make 73 Premier League appearances for the Latics, scoring eight goals, and he was an ever-present last term.

With less than 12 months remaining on his contract at the DW Stadium, it was always likely he would receive interest during the summer window. And Roberto Di Matteo, who last month signed a two-year contract to continue his fine progress at Stamford Bridge, is leading the list of admirers.

The Italian coach is eager to add Moses to a squad which is set to undergo a number of changes since that famous May night in Munich, when the Blues won a first UEFA Champions League courtesy of a penalty shootout success over Bayern. The hero of that match, Didier Drogba, is one of three senior players who have already departed, along with Jose Bosingwa and Salomon Kalou.

Di Matteo wants to add more youth to his options, and has spent heavily on Lille playmaker Eden Hazard (£32million) and Marko Marin (£7million) of Werder Bremen.  Moses is far from the only player remaining on his wanted list, but having now failed with three offers, the first of which caused Whelan to accuse the Londoners of ‘taking the Mickey’, it is clear he features near the top.

The Wigan chairman has stressed that, despite the Nigerian international’s contract situation, he is in no hurry to sell: as the player is under the age of 24, even letting him run down his deal would net the Lancashire club a compensation fee next year. However, whilst he still hopes Moses will agree fresh terms to extend his stay, he now concedes that the former Eagles youngster has a price.

“They’ve made three bids and we’ve not accepted any,” Whelan, speaking to The Sun, said of Chelsea’s attempts. “They’ve all come in the last three weeks, but they’ve not offered enough. We’re still hoping that he signs an extended deal.

“I don’t know if they’ll bid again, but if they do we always listen. And if it is what Roberto believes he is worth then we will take it from there. If the lad had any brains he’d stay under Roberto for another year or so.”